This was the first Raymond E Feist book that I have read, and I don’t know why I haven’t heard about him or read any of his books sooner! 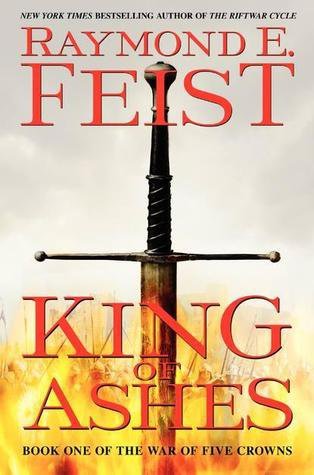 There once were five kingdoms in this world, each with their own King and culture. There was peace between all five, and where this book picks up is right after four of the kingdoms betrays the fifth. That kingdom was Ithrace, and its King was Steveren Langene, known as the Firemane for his bright red hair. Even his allies turned against him when they saw that Ithrace would be destroyed. The victors then put Steverens entire family to death, women and children included.

Before (and after) the betrayal, there is a legend that a “rampant chaos would be unleashed upon the world should the Firemane line end”. So because there was no end of the world, many start to assume that there is a missing Firemane child.

This is a (mainly) dual perspective book, following two young men. One is Declan, a young master blacksmith who lives in the Covenant lands, which is a place where the five kingdoms declared to be a safe area free from any wars or political maneuverings. Then we also follow Hatushaly, or Hatu for short. He is a very angry and confused youth who is training at a school for assassins. It is shown pretty early on that Hatu isn’t a native of the island nation where his school is located, and he has to hide his bright red hair. It’s not a spoiler, but it is implied upon meeting Hatu that he is very likely the missing Firemane child mentioned in the prologue. We also get a few chapters from the perspective of Hava, who is Hatu’s best female friend who is the best fighter at their academy.

The world building was phenomenal, there were so many different races, religions, and histories mentioned and I love it when books have a fully fleshed out world where everything is explained! I know some people don’t enjoy it when books are too detailed, but for me, I would prefer more detail, especially when it comes to the world.

Another great thing this book had going for it were the characters. Hatu and Declan were both so different and they were fully realized and fleshed out. They both go through some major character development as they figure out who they are and their place in the world. Baron Daylon Dumarch also plays a huge role in the book, as he is the one who spirited away the missing child in the prologue and has been pulling strings to finally rise up against the people who betrayed his best friend, Steveren. It’s never really discussed what his motives are or why he wants to keep an eye on Hatu and Declan, but since this is the first book in a series I don’t expect it to give away all the secrets and plot twists!

There is a lot of set up for the series in the first book, but that is the case with many first books in series. The main issue that I found myself having was that every time we would go back to a perspective, we would basically get a recap on everything that happened previously. I didn’t really notice it at first, but once I hit about 200 pages then I really started to notice it and it bugged me a little. It was almost like coming back to a TV show after a commercial break. I also didn’t really think that Hatu’s anger issues needed to be pointed out as much as they were, I would have preferred it to be shown, instead of always telling us that he is angry, if that makes any sense.

Another thing that I didn’t like was that the synopsis led me to believe that Hatu and Declan would meet and go on adventures together, but that isn’t the case. They don’t even meet until the last, like 100 pages or so. I also wished that there was more assassin stuff going on, because Hatu is being trained by assassins but we didn’t really get anything out of that. But if course that could just be my love of assassins in fantasy rearing its ugly head. If a book mentions assassins even remotely, I want more of them!

Overall, this was a really enjoyable fantasy with great characters and great world building. As the first in a new series, the plot didn’t really go anywhere, just a lot of set up for the rest of the series. I do plan on continuing on with the series as soon as the next book comes out! I also really want to read some of his other works, so if anyone has read anything by Raymond E Feist before give me some recommendations as to where to start!