The Queen of Blood ~ REVIEW

There are a ton of books out there (especially YA) that have this same theme of a kingdom on the brink of war/destruction, with multiple POV’s where there is to be an eventual fight for the throne, but this was just so unique that it blows all the other books like this out of the water.

One of my absolute favorite parts of this book is the magic system. Again, it has a pretty standard YA fantasy base in elemental magic, which I am a sucker for no matter what. But then it adds in the fact that it isn’t the people working elemental magic. There are elemental spirits whose main purpose is basically to destroy humanity and create life. For example, there are wood spirits that create trees and bushes, water spirits that create lakes and rivers, and so on and so forth. These spirits don’t harm humans (well, not usually) because the queen is the one person who can control them and impose a rule called “do no harm” so that the people are safe from the spirits.

Going along with the magic system, their monarchy is interesting as well. The longer the queen rules, the more she loses her grip on the spirits. She has many different heirs who could possibly be queen after her, but they are all unrelated to her. In this world, only women have the power to control the spirits and the spirits are the ones who choose the next queen from the heirs.

The other major plus that this book had going for it was the setting. It is so completely different than your typical fantasy (Medieval/European). In this world, all of the houses, villages and cities are built in the trees, which is basically where I would love to live if I was in a fantasy world! 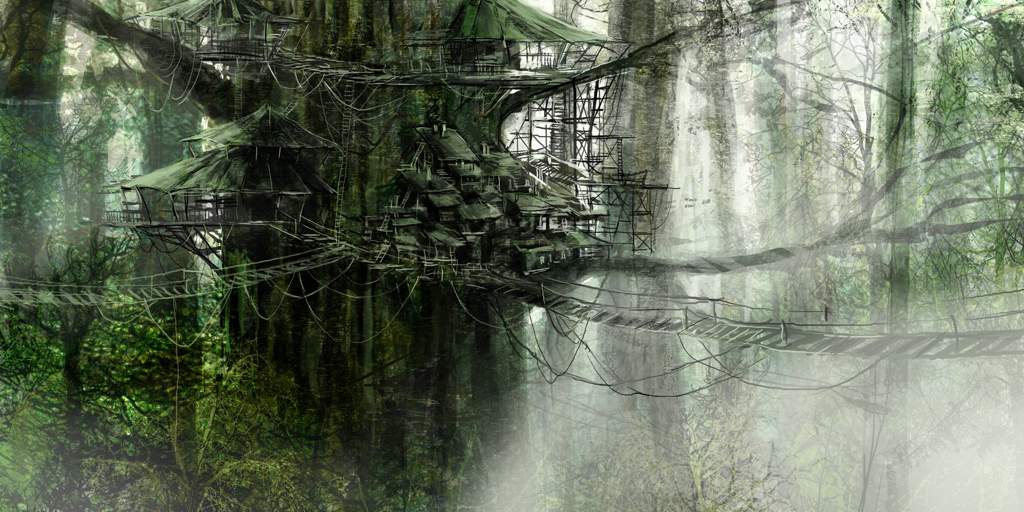 And then there is Daleina. I think she is honestly one of my favorite characters that I’ve read in a very long time! The book starts off with her entire village being destroyed by spirits, and Daleina discovers that she is one of the few women who has the ability to control the spirits when she defends her family from the attack. With her entire village slaughtered, she vows that she will not let something like that happen again and therefore, needs to become stronger and better at controlling the spirits.

That is pretty much where the similarities to any other YA fantasy stops. In many books, Daleina would become the chosen one to stop the spirits and would instantly (or at least, very quickly) master her abilities and save the day. I’m here to tell you that that is NOT the case. She’s one of the worst heirs that have been named and she pretty much gets by through strength of will, smarts, and strategy instead of others who use their power and strength. Instead of controlling the spirits, she learns to redirect them to build instead of destroy. What I loved the most about her is her determination and dedication to making the world a better place. She’s not special in anyway, but she works hard and it shows.

The two perspectives we get are actually Daleina and her mentor, Vin who is more of a father figure to her throughout her training. There is a romance, but it was more for Daleina’s character development than a true romance, and it never distracts her from her goals. There is also an INSANE amount of female friendships in this book! All of the girls are competing to become heirs, and then to be named Queen and not once do they see each other as the enemy. They help each other out and encourage each other.

If you know my reading tastes, you know I tend to lean towards the more brutal high fantasies (Game of Thrones, anyone?). Make no mistake. This book is brutal and bloody and fantastic! The ending was just so intense I was literally freaking out for the last 50 pages or so. None of the characters are safe from this author and that is the way I like it!

So, if you like unique, brutal high fantasies, YOU NEED TO PICK THIS UP IMMEDIATELY!!!

2 Comments on “The Queen of Blood ~ REVIEW”