Hey everyone! I saw Spencer from Common Spence did this super unique way of predicting the plot of books and I thought I would take a crack at it! I’ve never seen anything like this before, so full credit goes to Spencer for doing this. You can find his original video here.

Most of you probably don’t know this about me, but recently I got my first tarot card deck so I’ve been having a lot of fun testing it out and it can be scarily accurate at times! I am by no means an expert as I’m still learning, so this is all just for fun and shouldn’t be taken too seriously. I’ll be following Spencer’s lead on this and will be using a traditional 3 card spread to predict the beginning, middle and end of 3 books off of my shelves!

The one and only deck that I have is called Witches Tarot, and it’s a BEAUTIFUL deck! The art is all digital, which means it looks more realistic and the art is very vivid. The backs of them have this gorgeous galaxy with the triple goddess in the middle. The front of the cards have the name of the card at the bottom so they are pretty easy to read.

The first book I will be predicting the plot of is The Ninth Rain by Jen Williams! I recently picked this book up, but I don’t really remember the synopsis so this could get pretty interesting. 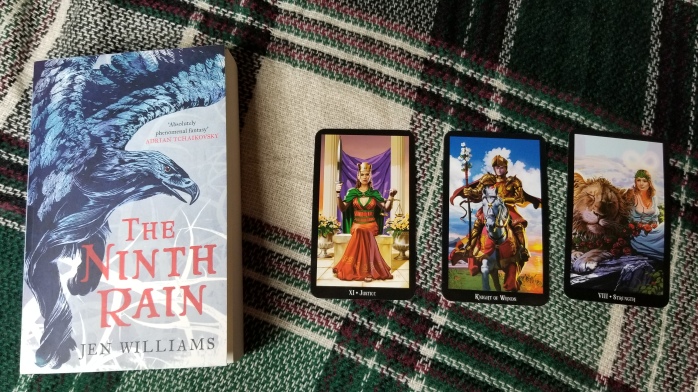 The first card is the Justice card, which is one of the Major Arcana cards. These usually represent major life events or situations that we all face at some point in our lives. This particular card usually represents cause and effect and reminds us that we have to pay attention to important details. When this appears it can mean that you need to ask yourself what is out of balance and what seems unfair in your life. In regards to this book, I think it means that at the beginning of the story out main character will be in a situation that seems unfair or the odds are stacked against them and they need to do something to change their situation.

The second card is the Knight of Wands, which usually represents adventure, change, or some sort of travel. It can be telling you that an opportunity to travel or be telling you to expect the unexpected. Pairing this with our first card, I think that this means that our main character probably does something drastic to change their situation and ends up going on a quest or some sort of adventure in response to how they are treated. 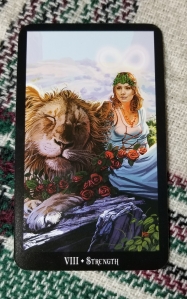 The final card is the Strength card and when this card shows up, it is usually a reminder that brute force is not necessary, but determination and strength of character are. So when we combine all three cards together, we have a main character who is faced with an unfair situation and knows they have to do something to change it, so they head off on an adventure to change their fate. Something unexpected will ultimately happen, but by the end, they will find that as long as they stay determined and believe in themselves, everything will work out in the end.

The next book I want to predict is Blood of Elves by Andrzej Sapkowski. This is the first full novel in The Witcher series, and while I have played the video games, I know that the books have so much more detail than what is included in the video game.

The first card is the Seven of Swords, which usually represents someone who is smart and resourceful and tries to avoid confrontation. You need to think outside the box and look at things from a new perspective to find a new solution to a problem. From the little I know of the series, I think that this probably represents Geralt. I also know that his ward Ciri is basically like a savior for this world, so I would think that this means he is trying to come up with a way to help her with her journey without angering or causing problems for her.

The second card we have is the Five of Pentacles, which generally means that the person you are reading the cards for is having a tough time, they are feeling isolated and are losing faith in themselves. It also shows us that life goes on and no matter how bad things are, hope and new possibilities are right around the corner. So in the context of this book, Geralt starts to feel lost and doesn’t know how he can best help Ciri, and things are starting to go downhill and just aren’t working out the way he thought they would. But he needs to remember that things will turn around eventually. 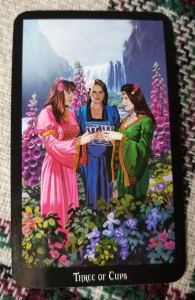 The final card for this book is the Three of Cups. This is a card of celebration, and tells you that you should gather with your friends and have a good time. It also represents growth and success. Combined with the other two cards, when things are feeling hopeless for Geralt, he turns to his friends for help and to combine their strengths to reach their goal.

The final book that I want to predict today is Elantris by Brandon Sanderson. All I know about this comes from the tagline on the back “Elantris was the city of the gods. What power could have cursed it?” and that it follows three different characters.

Our first card is the Two of Swords, which usually means that your heart is saying one thing but logic and your mind are saying another. This person has closed themselves off from their emotions, and they must look at both sides of a situation and stay calm and consider their options. In this case, since the synopsis mentions only one woman, I have a feeling that this card represents her plot line. She hasn’t been doing a good job of examining things before she acts and has boundaries that no one can cross.

Our second card is the Five of Wands, which is an interesting card since this book has multiple perspectives. This card means that there are differing opinions, bickering, and that there are challenges ahead and communication is key to overcoming them. With three characters who are most likely trying to figure out how the city was cursed, they probably run into each other at some point and most likely will not get along or agree with one another as to what happened.

And the final card for this book is the Six of Cups. This can mean an act of good will, having a clear conscience or feeling nostalgic and carefree. In the context of this particular book and knowing that this is considered a standalone currently, I can image that our three characters finally come to an agreement, most likely after a major revelation and are finally free to go back to their lives without worrying about the fate of this city.

So there we have it for my tarot card plot predictions! I have no clue how accurate I am with these predictions, but I plan on doing a follow up post once I read these books giving an update on how accurate I was. And again, I’m still new to interpreting the cards and what they mean so I could be horribly wrong!

Have you read any of these books and am I close? I’d love to discuss in the comments! I’d also love to see your plot predictions, so if you do this tag me! I enjoy seeing other peoples attempts at posts, and of course give Spencer credit as well!