They Mostly Come Out at Night REVIEW

They Mostly Come Out at Night by Benedict Patrick is a self published fantasy that I included in my Self Published Fantasy on my TBR post (which if you haven’t checked that out yet, I highly recommend it). I really enjoyed this book and I look forward to reading more from this author! 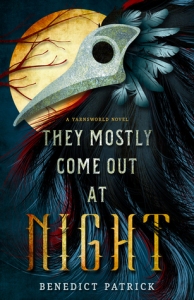 He locked himself away from the dark, but in the Magpie King’s forest nowhere is safe…

Lonan is an outcast, accused of letting the monsters that stalk the night into the homes of his fellow villagers. Now, he will not rest until he wins back the heart of his childhood love and reclaims the life that was stolen from him. However, locked safely in his cellar at night, in his dreams Lonan finds himself looking through the eyes of a young prince…

Adahy has a destiny, and it terrifies him. How can he hope to live up to the legend of the Magpie King, to become the supernatural protector of the forest and defender of his people? But when the forest is invaded by an inhuman force, Adahy must rise to this challenge or let the Wolves destroy his people.

Watching these events unfold in his sleep, Lonan must do what he can to protect his village from this new threat. He is the only person who can keep his loved ones from being stolen away after dark, and to do so he will have to earn back their trust or watch the monsters kill everyone that he holds dear.

The first thing that had me interested in this book was the cover because it is STUNNING, and then after reading the synopsis it sounded like it was going to be dark and creepy and I was so prepared for that!

It was a little confusing getting into the story and learning about this world, because it’s a little unclear as to whether or not the clans (mouse, owl, magpie, etc.) are people with human interpretations of each animals characteristics, or if they were actually the animals. I think that it is the former after finishing the book, but I’m still not 100% certain.

In this world, there are these creatures that come out at night and attack the villages, and it’s not safe to be outside at night so the villagers sleep in cellars to protect themselves. In one particular village we follow Lonan, who as a child was accused of causing these creatures to attack and kill his father and his best friends mother. But Lonan knew that he didn’t cause it, he was trying to warn everyone of the coming danger.

Lonan also has these dreams where he can see the Magpie King, who is the protector of the villages and destroys the creatures in the night. To the rest of the villagers, the Magpie King is just a myth. Lonan soon realizes that his dreams aren’t just dreams. They are visions of the real Magpie King.

One thing that I really liked about this world is the magic system, which are called Knacks. Anyone can develop a Knack and it’s based off what you do best in life. So if you are a farmer, you would develop a farming Knack and be especially skilled at that, or if you are training to be a blacksmith, then you will probably develop a Knack for blacksmithing. There are also Knacks for washing clothes and cleaning as well, which tend to be the Knacks that women develop during the course of taking care of the home.

Another thing that I really enjoyed was the fairy tale aspect. In between each chapter is a tale about this world and they add to the story that is happening in the surrounding chapters. I would love to read more of these fairy tales as they were dark and creepy and extremely entertaining. Think Brother’s Grimm fairy tales.

There is also a nice twist in this book that I didn’t really see coming and I had no idea how the characters were going to come back from that. This definitely doesn’t have a “happy” ending, but with this book it worked very nicely. It is also the first in a series, so it will be interesting to see what the next books are about since this one was wrapped up nicely.

The downside for me was the pacing, at times it felt like the story was dragging while at other times it felt like it was going too fast. I also wish that there had been a little more explanation about the world and the characters, but for a book under 300 pages, it wasn’t bad.

This was a really enjoyable, quick fantasy read that was well written. I haven’t read too many indie books yet, but this one is setting the bar quite high! I highly recommend this!

6 Comments on “They Mostly Come Out at Night REVIEW”