I thought that February wasn’t going to be as good of a reading month as January, but I’m still ahead of schedule for my reading goal of 60 books! I’ve read 8 books in February for a total of 3,053 pages. Three books were published in 2018, one book from 2007, one from 2019, one from 2015, and two from 2020 (one of which was an ARC!). Seven of the eight books were part of a series, three being continuations and four being the first in series. Finally, I had a total of one 2 star, four 4 star, one 4.5 star, and two 5 star reads. I also had two DNF’s this month, which I will talk about last.

Children of Blood and Bone by Tomi Adeyemi – ★★★★.5
This was a book that I had predicted would be a 5 star read for me. I loved the world and the characters, but I wish that we had gotten more information about the world. I also couldn’t really get behind the romance either, which is why in the end I couldn’t give it a full 5 stars. I have a full review available on my blog if you would like to see more in depth thoughts on this book!

Ash Princess by Laura Sebastian – ★★★★★
I’m really hoping that this will be a new favorite series for me because this was such a promising start to a YA series! It does have a lot of standard YA elements, but I think they were done very well. I’m excited to see where this series goes, because I feel like it will have quite a few twists and turns. I have afull review of this book as well if you want to see more thoughts on this book!

Rogue Protocol by Martha Wells – ★★★★☆
It’s been a while since I finished this book, but this was such a fun entry to this series. I love MurderBot and how they struggle with being around humans and dealing with maybe becoming more in tune with their human side. I did miss ART from the second book, but Miki was so wonderful and caring! The contrast between these two characters was honestly perfect. There’s a lot of diversity packed into this series, and it’s so action packed! The audiobooks for this series are phenomenal and I highly recommend them.

The Arrangement by Robyn Harding – ★★☆☆☆
I was pretty disappointed with this book because it could’ve been great! I liked the idea of exploring the relationship between a sugar baby and a sugar daddy and how that relationship could go wrong, but it failed in the execution. The relationship between Natalie and Gabe was underdeveloped and there was no chemistry between them, Natalie was really inconsistent in her emotions and beliefs, and for a thriller, there was hardly anything at stake. I have a full review for this book as well if you want more thoughts on why I didn’t enjoy this one.

Heart of Flames by Nicki Pau Preto – ★★★★★
Oh. My. God. I think I can safely say that this series is a new favorite, and it isn’t even completed yet! It took me a little longer to finish this, but not because I didn’t want to read it – I didn’t want it to end! The twists and turns and reveals we get are just mind blowing, and at one point I was even tearing up because I got so emotional! I haven’t written a full review yet (at least, not at the time I’m doing this wrap up) but keep an eye out for that bothhere on my blog and on my Goodreads!

Vampire Academy by Richelle Mead – ★★★★☆
I was really surprised by this book! I’ve seen the movie a few times and I found it enjoyable, but I also knew that people who read the book first didn’t like the movie so I wanted to see for myself how I would like the book versus the movie. I still love the movie, but I can definitely see why people were so angry at it because it is different from the books. I’m excited to continue this series because they’re quick, entertaining reads and will be perfect if I ever need to get out of a reading slump!

Wicked As You Wish by Rin Chupeco – ★★★★☆
I’m so surprised I was able to finish this in February! I wasn’t sure, so I added it to my March 2020 TBR which means I have one less book I need to read in March! I thought this was a really fun read, but at times I was a little confused by the dialogue and how all these fairy tales interacted with the real world. That aside, the idea of having all these fairy tales, myths, and legends as real events and people in our world was really interesting and I’m interested in seeing where this goes because I never saw that ending coming! You can find my full review here!

Saga Volume 5 by Brian K Vaughan – ★★★★☆
I’m still really enjoying this series, and even though I’m taking quite a long time in between each volume I’m finding that I still remember who is who and what happened in the last installment which is a good thing. I don’t really have too much to say about the plot this far into this series so I don’t ruin it, but just know that I still love all these characters and I love seeing Hazel grow up!

DNFs (Did Not Finish) 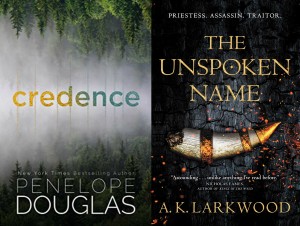 Credence by Penelope Douglas – I ended up DNFing this at about 70%. I had never read any books by Penelope Douglas, and I saw someone (at this point I don’t remember who) who was talking about this book on YouTube and how great it was. So I picked it up! I’m okay with reading smutty books, but this one took it to a level where I was pretty uncomfortable with it and just couldn’t bring myself to continue.

The Unspoken Name by A.K. Larkwood – I ended up DNFing this at 20%. I have a full review already that you can check out if you want to see more thoughts, but basically this comes down to another book that isn’t for me. I was so confused as to what was happening, and two years went by with almost no detail in the first 20% of the book. This book also tells you things instead of showing you, and I’m not normally a fan of that.