I have a few of Tad Williams books on my shelves (the Memory, Sorrow, and Thorn trilogy, Shadowmarch, and Shadowplay). I know that he’s a pretty well known fantasy author, but I don’t tend to hear too much about him or his books (at least not in my corner of the bookish community). His books sound like they will be right up my alley – classic fantasy: wars against good and evil, magic, the chosen one, epic quests, you name it! The only thing that’s stopping me from reading his books sooner rather than later is the fact that they are all over 600 pages, and when you have deadlines to meet with other books, it’s hard to get those longer books done!

Yes, I haven’t read Red Rising yet. For someone who loves both fantasy and science fiction, it’s crazy to me that I still have yet to start this series that everyone seems to love! I own both Red Rising and Golden Son, and every time I go to pick up a new book to read I take one look at these and think “maybe later”. Why? I think it’s because I’m afraid the series won’t live up to the hype I’ve created in my head.

As you can see, I have quite a lot of books by Juliet Marillier. In fact, I have two full series and the first book in the Sevenwaters series! It sounds a little crazy to have this many books by an author whose books I haven’t read yet, but I’ve actually read the first chapter of Dreamer’s Pool (for a first chapter challenge I did to pick my next book) and I really liked the writing style. I just have had so many other books that are a higher priority so these just keep getting pushed back.

Everyone and their mother seems to love N.K. Jemisin, and I’m hoping that I will too! I know that The Fifth Season can be a little tough to get into at first because it’s quite different from your standard fantasy, but that’s what makes me really interested in reading it. I think I might start with The Inheritance Trilogy though, as I have the (massive) bind up of the whole trilogy and it doesn’t seem to get as much hype as her other series do.

The Chronicles of the Unhewn Throne is a series that I’ve heard good things about from the people who have read it, but overall not a lot of people talk about this series currently. I’m curious to see what I think, and the covers make me think that maybe there is some sort of flying creature they ride? If you know me, you know I love any sort of animal companion so I’m hoping this will have that. I also believe that there is a lot of political intrigue – three siblings are fighting for the throne and each has a particular skill set that will make that fight very interesting!

Another author that I have a bunch of books for and haven’t yet read anything by, but in my defense I bought the box set of the Poison Study series after I had Storm Glass, Sea Glass, and Spy Glass because I didn’t realize that they were the second series. I also know that this is an older series so not as many people talk about it now, but the people who have mentioned it have said that they enjoyed it, and the first book has a 4.13 rating on goodreads so I’m interested in seeing what my thoughts are…eventually!

Alison Croggon is another author whose books I’ve never read but i have a few different books by her that I really want to read! I first heard about The Bone Queen, which is a prequel to The Books of Pellinor, maybe 3 months ago or so, and I read about 30 pages and decided that I needed to get the original series too! I haven’t continued with The Bone Queen yet (again, too many other books that are higher priority) but what I read was intriging and I’m hoping I can continue reading this series soon!

James Islington is one of the authors on this list who only has a few books published, but that doesn’t lessen my excitement to read this series! I literally don’t know anything about it because I’ve avoided reading the synopsis so far because for some reason I feel like going into this with no expectations or idea of what will happen will be the way to go. Although, that could be a major mistake, but I won’t know until I get around to actually reading this series. 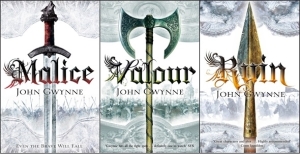 Technically I’ve already started reading Malice, but (yet again) had to put it down to read high priority books. From the little that I read, I think that this will be something I will enjoy. I know that this will have a ton of political intrigue, magic and a prophecy that there will be two champions – one who will save the world and one who will doom it. I love all of those elements so I’m hoping that once I’m done with my high priority books I can continue reading the first book!

I mean, do I need to explain why Joe Abercrombie is on this list? So many people love his books and they’ve been recommended to me a few times, I just haven’t had the chance to actually read The First Law trilogy yet! I do own this entire first trilogy, and I know that they are brutal and dark and mostly character driven. The only thing that I’m concerned about not liking is the fact that it’s character driven since I don’t have the best track record with liking character driven stories, but enough people have said good things that I think I’ll still like this series.

Who are some authors on your TBR? Do we have any in common?